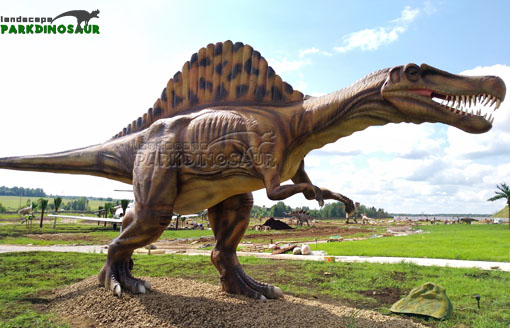 Largest Carnivorous Dinosaur Spinosaurus
Jan. 08,2020
Spinosaurus is a theropod dinosaur that lived in the Cretaceous nowadays Africa, about 95 million years ago to 93 million years ago. If you want to have a Artificial Giant Spinosaurus Statue, please contact us freely
view more
Popular Dinosaur Species
The Dinosaur Like a Tank Ankylosaurus
2020-03-14 11:35:00

Ankylosaurus is a type of dinosaur that feeds on plants and is covered in "armor". They are generally five or six meters long, with hind legs longer than forelimbs, and a heavy body. They can only crawl slowly on the ground with their limbs, and they look a bit like tank cars, so some people call them "tank dinosaur".

Ankylosaurus is very large compared to the most modern land animals. Some scientists estimate its length to be about 9 meters. Ankylosaurus walks on all four feet, with hind legs longer than its forelimbs. The skull is flat and triangular with a width greater than its length. The largest skull is known to be 64.5 cm long and 74.5 cm wide.Ankylosaurus is herbivorous and has very small leaf-like teeth that are suitable for biting plants. The skull and bones in other parts of the body are closed to strengthen its strength.

The most obvious feature of the Ankylosaurus is its armor, which consists of solid nodules and decks, embedded in the skin. Similar armor can be found on crocodiles and some lizards.